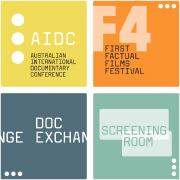 It’s Festival Time in the Festival State. Running with the F theme I could also call it Fatigue Time because, let’s face it, Adelaideans need a good long nap at the end of March. Here at Behind the Screens we aim to inform you all on the film happenings across the city at this exciting time. One of the biggest film conferences on the Australian calendar is the Australian International Documentary Conference, being held at Glenelg from January 27th to March 1st. It’s a place for factual film makers from Australia and internationally to meet, pitch and learn. Caroline Man, manager of the AIDC Marketplace and the First Factual Film Festival (appropriately shortened to F4), came in for a chat about the conference and some of the fantastic films showing as a part of the F4.

You can catch the four films screening as a part of the F4 at the Mercury from March 2nd to 4th.

UK comedian Sanderson Jones is a purveyor of fine hand sold comedy. That’s right, you can only buy his tickets through contacting him – because he wants to get to know you! But that’s not why he’s here today. While in Australia, he will be recording his travels and exploits as a part of film project and funding himself through the profits of his comedy shows. Sanderson and his travelling companion, director and cameraman Tom Clint, enjoyed the air conditioned studio while telling us all about the show and their impressions of Adelaide so far, including a lively encounter with the Rundle Mall street preachers.

Get tickets for his Adelaide show on March 22nd through the man himself at ComedySale.com and check out their last visit to the station when they came in for Breakfast with Tim Brunero.


Chrissy and I also had a bit of a natter about the Oscars because I am unashamedly enthused about the Oscars, and Chrissy reports back on her thoughts on “Any Questions For Ben?”