Amanda Duthie took over from Katrina Sedgewick at the end of 2011 as the director of the Adelaide Film Festival. She came directly (six hours break, in fact) from her former position as content head of Arts and Entertainment at the ABC to Adelaide and is taking the time to get to know the city and our filmmaking culture.

Amanda came into the studio to talk about the South Australian premiere of Save Your Legs!, which will be screening at the Adelaide Oval as a special placeholder event for the new AFF time of October. We also talked about the international reputation of the festival and what we might be in store for next year when the Adelaide Film Festival takes over October.
Download: Amanda Duthie

Last week, three very talented makeup artists from the Adelaide Zombie Walk came in to discuss the beauty of non-beautiful makeup. We ran out of time live on the show so we took our conversation into another studio to continue our chat about the shift to CGI over conventional makeup, what it takes to become a SFX makeup artists and the best recipe for fake blood.
Download: Bec, Zaen and Leigh

And now we cross to our Sydney correspondent … Chrissy Kavanagh, fellow Behind the Screens host, is over at SPAA Fringe, an event held by the Screen Producers Association of Australia – SPAA. She called in to give us the lowdown of what’s been happening over on Cockatoo Island.
Download: Chrissy Kavanagh

Six people. Two hosts. One hour. We call that a challenge and the challenge is accepted.

Richard spoke about the SAFC’s 40th Anniversary Celebrations and the next 40 years for South Australia’s screen agency. Amongst the festivities is an exhibition called “From A Sunday Too Far Away” at the State Library of SA which includes behind the scenes treasures from their Hendon vault. We also discussed the reasons behind the change from the SAFC as a film producer, to a funding agency in 1994. 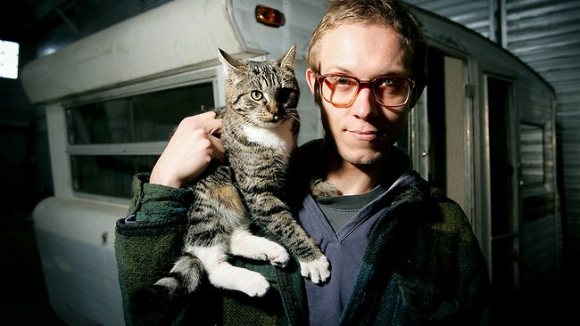 Amiel’s first feature, “Hail”, has documentary elements but a fictional narrative. It’s an emotional journey between Danny and Leanne, who both play fictional versions of themselves, but at its core it’s a love story

“Hail” begins its Adelaide run tonight (October 20) at the Mercury Cinema on Morphett St. Amiel and lead actor and inspiration Danny P Jones will be there for a “meet the filmmaker” session after the screening.

3. Ian Darling, director of Paul Kelly: Stories of Me.

Ian is no stranger to documentaries. He has directed and produced many feature documentaries, including the AFI award winning “The Oasis” (2008) and his most recent work is his doco on Paul Kelly, “Paul Kelly – Stories of Me”. He is also the founder of Documentary Australia Foundation, a philanthropic initiative supporting the documentary film industry in Australia. We spoke about that and finding enough footage through 40 years of material for a feature length film.

“Paul Kelly – Stories of Me” is showing at Her Majesty’s Theatre this Thursday, October 25, at 7.30pm. Paul will also be there and performing a small set.
Download: Ian Darling 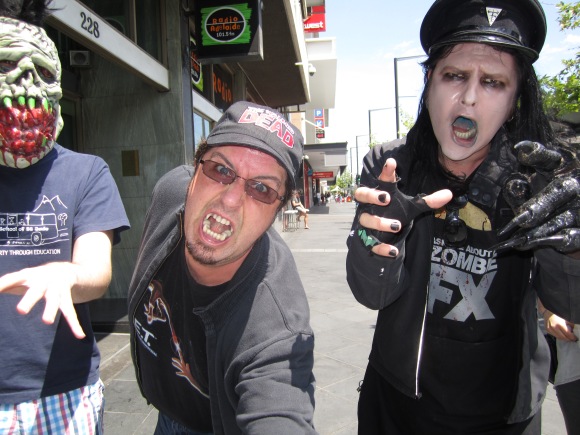 So why do people want to dress up like zombies for charity? Because it’s amazing fun. Three makeup artists who supply their talents for the Adelaide Zombie Walk came in to the studio to chat gore, latex and dirty good fun.

We didn’t have enough time to get our SFX fill so tune in next week for the second part of our interview where we discuss the future of makeup (CGI killed the makeup star?) and how you can get your hands dirty in the world of latex, blood and gore.